Getting ready for Black Lives Matter Week at School

Join the Abolitionist Teaching Network and the authors of "Black Lives Matter at School" for a reflective conversation. 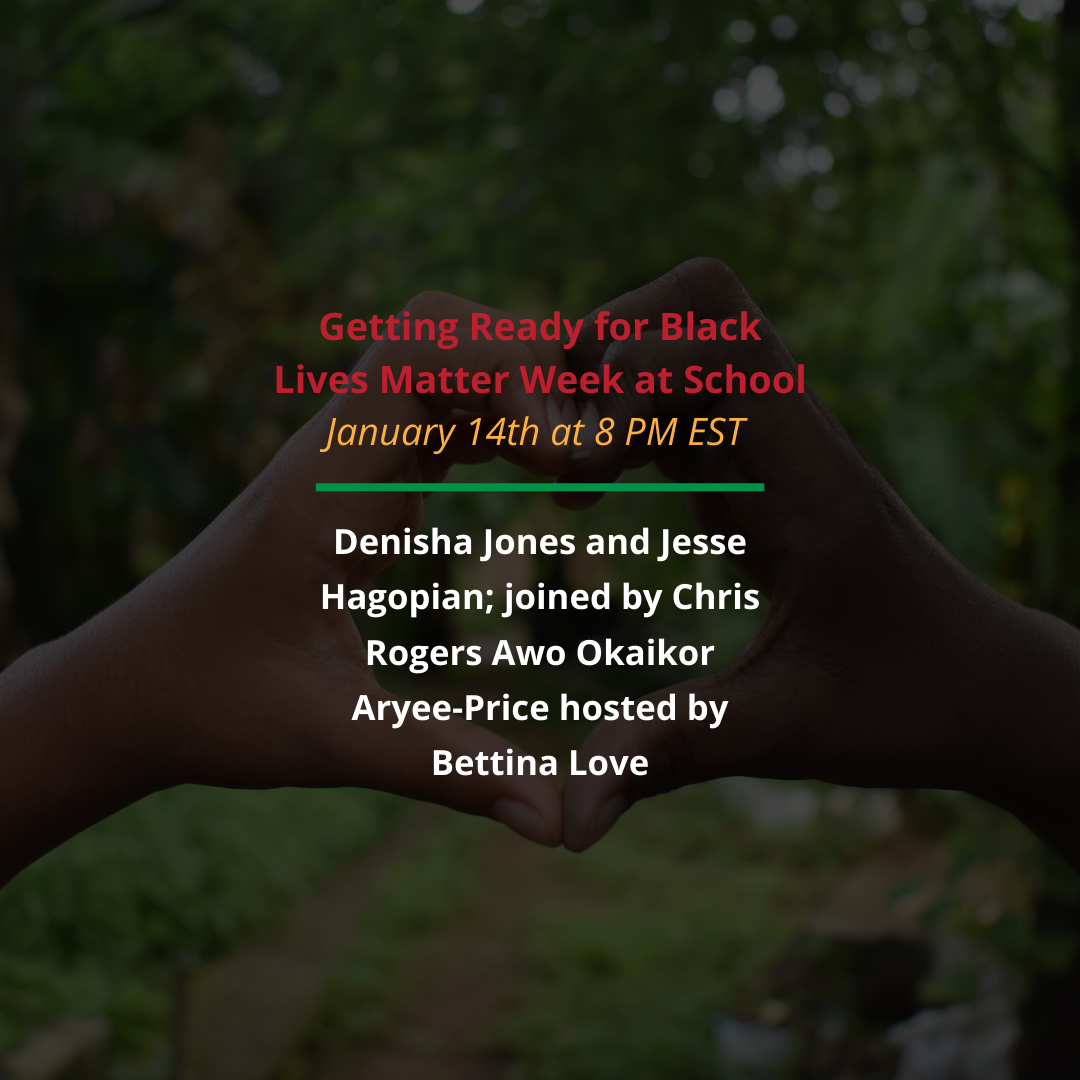 There are currently no tickets available for this event, but you can still make a donation.

Join ATN and the authors of Black Lives Matter at School, Denisha Jones and Jesse Hagopian, joined by Chris Rogers and teacher-activist Awo Okaikor Aryee-Price for a conversation that will help educators vision their approach to Black Lives Matter at School week of action (February 1, 2021 to February 5, 2021). This event will be live-streamed to YouTube and will not be recorded. We invite you to reserve a ticket at the price point that works best for you and your circumstances. We look forward to your attendance!


Denisha Jones is the director of the Art of Teaching Program at Sarah Lawrence College. After earning her bachelor’s degree in early childhood education from the University of the District of Columbia, Dr. Jones worked as a kindergarten and preschool teacher, and a preschool director. She earned her PhD in curriculum and instruction from Indiana University in 2013. In 2018, she earned her Juris Doctor from the David A. Clarke School of Law at the University of the District of Columbia. Dr. Jones is an education justice advocate and activist. She serves as the director of Early Childhood Organizing for Defending the Early Years, Inc., and is the interim assistant executive director for the Badass Teachers Association. Since 2017, she served on the steering committee for the national Black Lives Matter at School Week of Action. In 2019, Dr. Jones joined the Anji Play Study Fellowship program, where she will learn about true play based out of the Anji province in China and become an Anji Play Ambassador.

Jesse Hagopian teaches ethnic studies at Seattle’s Garfield High School and is a member of the national Black Lives Matter at School steering committee. Jesse is an editor for the magazine Rethinking Schools, the co-editor of the book Teaching for Black Lives, and the editor of the book More Than a Score: The New Uprising Against High-Stakes Testing. Jesse is a recipient of the 2013 national Secondary School Teacher of the Year award and the Special Achievement “Courageous Leadership” award from the Academy of Education Arts and Sciences. In 2019 Jesse received the “Racial Justice Teacher of the Year” from the NAACP Youth Coalition and the “Social Justice Teacher of the Year” award from Seattle Public School’s Department of Racial Equity. Jesse serves as the Director of the Black Education Matters Student Activist Award, which he created from a settlement he reached with the City of Seattle after having been pepper-sprayed in the face by a police officer without provocation at Seattle’s 2015 Martin Luther King Day rally. Jesse blogs at his website, www.IAmAnEducator.com.


Christopher Rogers (he/him/his) was born and raised in Chester, PA, and is now a PhD student within the Reading/Writing/Literacy program at the University of Pennsylvania Graduate School of Education. Chris is a core member of Teacher Action Group Philadelphia and public programs director for the Paul Robeson House & Museum in West Philadelphia. He serves as curriculum committee coordinator for the national Black Lives Matter at School Week of Action. His current research interest interrogates the intersections of race, space, and place in community literacy efforts, negotiating how intergenerational place stories relate to the necessity for community preservation and social action.


Awo Okaikor Aryee-Price is a former classroom teacher, antiracist organizer, and core trainer with the People’s Institute for Survival and Beyond, a teacher educator, and a steering committee member for the national Black Lives Matter at School. Most importantly, Okaikor is mom to Saige Ayikailey and Kaeden Nii Ayikundzra, and a partner to Keith Price.

You can support us by making a donation!